My husband was going to fry a turkey breast because we have a turkey fryer and they are tasty but we never eat the dark meat.  I thought that the green tomatoes I bought at the store would be good fried up to go with it. Now growing up in West Texas I only had a passing familiarity with fried green tomatoes but now living just outside Memphis they are like a religion. I haven’t been happy with the last attempts though. They all seemed to have a too heavy crust that just fell off. Researching the web gave me ideas ranging from using Panko, from Memphians no less, and bread crumbs. Nope not what I had in mind so I thought I would tweak the standard recipe. Usually you use corn meal but I thought maybe something lighter would be better so I decided to grind the cornmeal up.

Enter the food processor which to get to I have to move my heavy mixer and clear a counter covered in Hot Wheels and my laptop. All toys and computer and book stuff removed I poured 1 cup of cornmeal into the appliance and hit the on button. Nada. The cornmeal swirled around and got the processor nice and dusty with cornmeal but the consistency of the meal was unchanged. So now I move the bread machine and break out the blender. Said blender is about as quiet as the FedEx planes that go overhead at 3 a.m. so I am wishing I had earplugs. But the cornmeal is ground to a finer grain.

Side note on blenders: Do we really need all of those buttons or are the makers of blenders just fooling us? If I put something in and push the “chop” button I don’t believe that it will really “chop”. I think it should be more like the “mush the stuff at the bottom and leave everything else in its natural state” button. All the functions seem to require you to stir the contents or else rock the blender in order for them to do anything. Just saying that I think having more than an on and off button might be a bit ambitious of the designers. 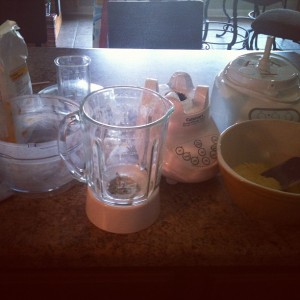 ½ cup flour plus ¼ cup for dredging

Slice the tomatoes fairly thick, I know people give measurements here but who really breaks out a ruler in the kitchen, then season with the Cajun seasoning. Mix flour cornmeal, salt, pepper, and more Cajun seasoning together. Spices are to taste so taste the dredge to see if it needs anything.  Mix eggs and buttermilk together then put ¼ cup flour in another pan.

Heat up the oil and set up a sheet pan with a wire rack. If not eating immediately now is the time to warm the oven to keep them warm. Dip the tomatoes in the flour then the egg mixture and last into the cornmeal mix. Pat the sides to be sure they are covered then shake off the excess. Carefully put into the oil and cook on each side until browned. Eat now or turn off the oven and let them sit in it until you are ready to eat them. I don’t give times since I don’t time anything and your oil might not be the same temperature as mine. No, I don’t use a thermometer on the oil this is real cooking not a chef show!

Hope yours are as good as mine were. The five-year-old gave me a hug and ate 3! 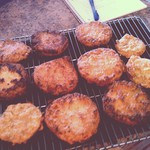 Leave a Reply to Aunt Cindy in Texas Cancel reply